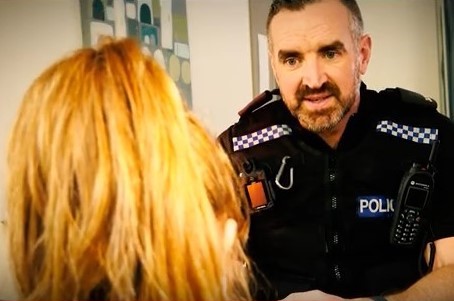 A new film focusing on the effects of domestic abuse incidents on children has been produced by Hampshire Constabulary.

Titled Voice of the Child, the film depicts police attending a domestic incident and dealing with a young girl witnessing a dispute between her parents.

“The aim is to highlight the importance of recognising the effect domestic abuse can have on children in the household,” explains Detective Inspector James Stewart, who led the filming team.

The scene is familiar to many frontline officers attending a home where partners are rowing, and is being used to remind officers of the importance of engaging and reassuring children present.

It is often easy for attending officers to get drawn into dealing with the crisis situation in front of them and inadvertently overlook the other people in the household.

The film has been created as a guide for officers to keep in mind Home, Health and Happiness – three aspects of a child’s life that are key to their overall welfare. The ‘three Hs’ emerged from a working group of experienced officers and partner agencies. It highlights the critical need to identify all forms of risk and vulnerability, creating space to be compassionate with children and try to understand how it may be affecting them is key. Guidance for officers relating to the 3 H’s is set out below:

Home: To consider observations such as cleanliness of home, adequate food and drink, condition of child’s bedroom, toilet, condition of bathroom. Is it a child-safe environment, are there toys and clothes for the child? Observe parents’ reaction to the child.

Happiness: To consider observations such as presentation and tone of voice, body language, interactions around parent.

Consider using universal signs of language to communicate such as thumbs up / down, smiley / sad faces

Identifying and recording concerns, along with the child’s views is fundamental to the quality of the PPN1 form to ensure schools and partner agencies can take the relevant action according to the voice of the child. As such, Hampshire Constabulary consider it important to share this video with partners as an insight into the work it is doing in recognition of the affects Adverse Childhood Experiences can have on children as part of it’s Child Centred and Trauma Informed Policing Approaches.

The film will be shown at officer training sessions and CPD events as a reminder to always listen to the Voice of the Child. You are welcome to use the video to support your own staff awareness and training.