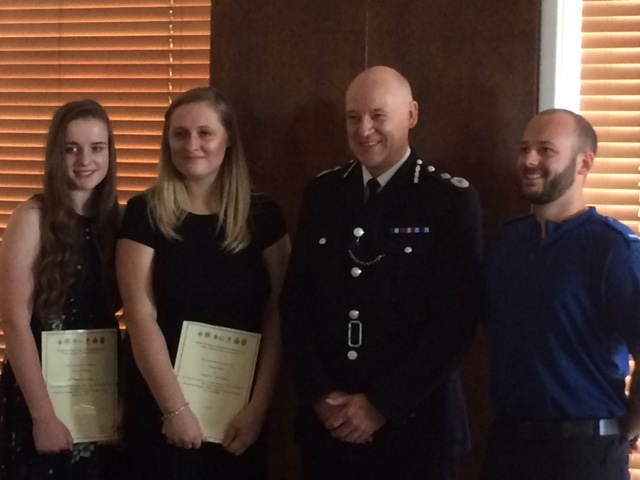 “Our volunteers are all young people themselves, they make a fantastic contribution to reducing re-offending as well as developing their own skills and confidence.”

Presented by BTP Deputy Chief Constable Adrian Hanstock, the Volunteer Team of the Year Award went to our very own Basingstoke Community Court who were represented on the day by young volunteers Alysia Callaway, Yasmin Webb and PCSO Richard Bird who has supported the team.

The District Commander for Basingstoke, Chief Inspector Matt Reeves said, “Hampshire Constabulary and the Safer North Hampshire Community Safety Partnership are incredibly proud of the work undertaken by the volunteers of the Basingstoke Community Court and I am absolutely delighted that they have won the regional award.  Our volunteers are all young people themselves, they make a fantastic contribution to reducing re-offending as well as developing their own skills and confidence.”

We are exceptionally proud of our Community Court Volunteer Schemes and congratulations to the Basingstoke Team for securing this award.

What is the Community Court?

The Hampshire Community Court is a youth led restorative practice programme aimed at supporting first time offenders and their victims of crime.

Volunteers aged 14-25 hold peer-led hearings with young offenders aged 10-17, their families and any victims of their crime who wish to attend. The aim of the hearing is to establish what harm has been caused and how it can be repaired or put right.

The Community Court works to enhance the police’s use of non-charged outcomes and is only available in suitable cases as an alternative to prosecution via the criminal courts. .

The Community Court only deals with young people who have admitted their crime and are willing to engage with a restorative outcome, as the programme does not set out to determine innocence or guilt nor does it substitute the criminal courts.

More information about the Community Court is available via the link below or by emailing: community.court@hampshire.pnn.police.uk